The unusual meeting in Tel Aviv, held on the eve of a festival, centered on the so-called Lion’s Den’ Group, which has claimed responsibility for numerous recent shootings against Israeli forces and civilians in the northern West Bank.

Earlier on Sunday, the army’s liaison with the Palestinians said it had revoked the entry permits to Israel of 164 family members of Palestinian “terrorist elements” in the West Bank city of Nablus, specifically referring to members of the Lion’s Den band.

The group, based in Nablus, was created in recent months by members of various terrorist groups. Some of its members were apparently previously affiliated with the Al-Aqsa Martyrs Brigade and the Palestinian Islamic Jihad, among others.

The decision to revoke their family members’ permits came shortly before Israel imposed a lockdown on Nablus, shortly after an Israeli soldier was killed in a shooting claimed by Lion’s Den.

Israeli soldiers are seen at the scene of a shooting near the West Bank settlement of Shavei Shomron, October 11, 2022. Inset: Staff Sgt. Ido Baruch, 21, killed in the attack. (Nasser Ishtayeh/Flash90; Israel Defense Forces)

The Israeli army said on Sunday that it would impose a new closure of crossings in the West Bank, after a violent weekend.

The closure, which also includes crossings with the Gaza Strip, was scheduled to begin at 4:00 p.m. Sunday and end at 11:59 p.m. Monday. The border crossings were to reopen “subject to an assessment of the situation and in accordance with the usual rules of hours of operation”, the Israel Defense Forces said.

In another move against Lion’s Den, video-sharing platform TikTok on Saturday banned an account belonging to the armed group. According to the Hebrew media, this decision came following requests from Israel.

Lion’s Den had used its TikTok account to post videos of its members carrying out shooting attacks and to spread its ideology.

Lion’s Den, which reportedly has several dozen members without a proper hierarchy, continues to have a large following on the Telegram messaging service. 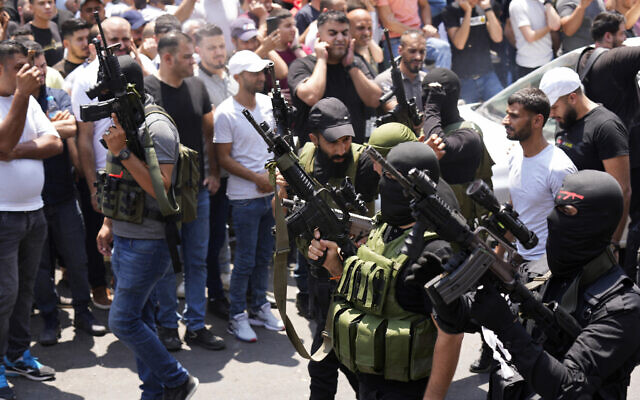 Palestinian gunmen attend the funeral of Ibrahim Nabulsi and two others killed in the West Bank city of Nablus, August 9, 2022. (AP Photo/Majdi Mohammed)

Tensions have risen sharply in the West Bank, with Israeli forces stepping up arrest raids and other counterterrorism efforts in the West Bank since a series of terror attacks on Israelis in the spring killed 19 people.

More than 100 Palestinians have been killed in Israeli operations this year, many in attacks or in clashes with security forces.

Emanuel Fabian contributed to this report

Israeli elections are approaching Again — this time November 1st. How did the electoral system become so dysfunctional, and what could resolve the repeated deadlocks?

The Times of Israel is proud to present a new limited series podcast, Crippled nation: How Israel’s dysfunctional electoral system can still be fixed. Our political analysts and journalists reach out your questions on the burning issues facing the Israeli electorate today.

Only available to members of the ToI community.

You are a dedicated reader

We’re really glad you read X Articles from The Times of Israel over the past month.

That’s why we started The Times of Israel ten years ago – to provide discerning readers like you with must-read coverage of Israel and the Jewish world.

So now we have a request. Unlike other media, we don’t have a paywall in place. But since the journalism we do is expensive, we invite readers to whom The Times of Israel has become important to support our work by joining The Times of Israel community.

For just $6 a month, you can help support our quality journalism while benefiting from The Times of Israel WITHOUT ADVERTISINGas well as access Exclusive Content only available to members of the Times of Israel community.

Thanks,
David Horovitz, founding editor of The Times of Israel