Berlin is a city defined by an eclectic mix of style and a rich history. Its built environment has been significantly shaped by a series of municipal building programs and, in turn, by a history of mass demolition, planned residential areas and various new cultural projects. Combined with influences from all over Europe, Berlin’s contemporary architecture presents new ideas about building concepts, shapes and facades. 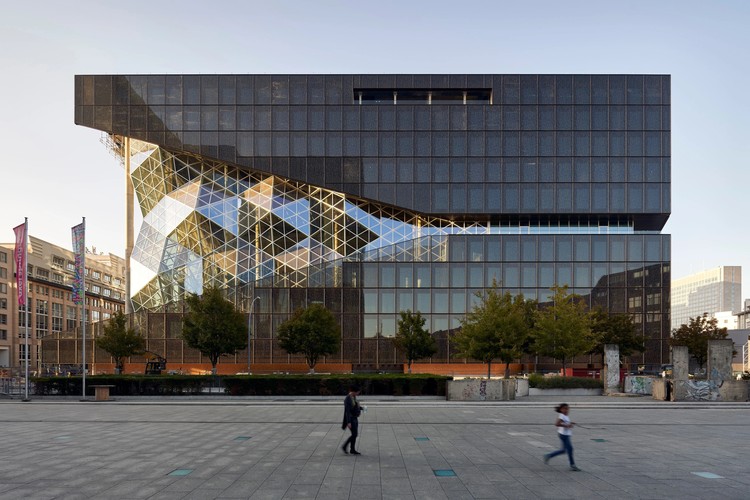 Bringing together projects that reimagine building elevations, each of the following designs are located throughout Berlin. Literally pushing the boundaries, they represent a range of formal and spatial movements across different programs and scales. At the same time, they draw on Berlin’s cultural history and reinterpret techniques and building methods from the past. The result is a celebration of the city’s eclectic nature through architecture and the built environment.

On Hauptstrasse in Berlin Schöneberg, GRAFT has revitalized the historic post office premises, expanding it with two new buildings and converting the original roofs for commercial purposes. Thus was created a modern complex of 32,000 m2 accessible to the public consisting of offices, restaurants, shops and apartments. The area around the building complex is one of the busiest residential areas in the city

This sculptural and iconic building features pioneering smart office technologies and is located in the heart of Berlin at the historically significant site, Washingtonplatz. As one of Berlin’s emerging new public spaces, this site provides the perfect setting for this new landmark that features the latest advances in sustainability, design, digitalization and comfort. cube berlin is part of the Europacity masterplan – an emerging urban district surrounding Berlin’s main train station.

Axel Springer initiated a transition from print to digital. Its new building on the Berlin campus acts as both a symbol and a tool in this transition – a building to attract the elite of digital Bohemia (Germany). Split in two by a diagonal atrium that opens onto the existing Axel Springer buildings, the essence of the design is a series of terraced floors that together form a “valley” that creates an informal scene in the center.

The new fashion center, Labels Berlin 2, was designed to provide exhibition space for around 30 different international fashion brands. A large event space and a small restaurant are located on the ground floor. The design concept responds to the architecture of the adjacent building. The interior spaces of this historic building are strongly characterized by the repetition of the arched windows used in the facade.

In 1987, the Berlin government held an anonymous competition for the expansion of Berlin’s original Jewish Museum which opened in 1933. The program wanted to bring back a Jewish presence to Berlin after World War II. In 1988, Daniel Libeskind was chosen as the winner among several other internationally renowned architects; his design was the only project that implemented radical, formal design as a tool of conceptual expression to represent the Jewish way of life before, during and after the Holocaust.

As a continuation of the forum architecture of Friedrich August Stüler, the James-Simon-Galerie serves as the new entrance building for the Museum Island, completing the ensemble between the Kupfergraben canal and the Neues Museum. Along with the ‘Archaeological Walk’, it forms the backbone of the Master Plan which was drawn up in 1999 and adopted as the basis for all further planning on Museum Island.

In 2016, JASPER ARCHITECTS won the competition organized by SIGNA, Austria’s largest private real estate company, for a comprehensive redesign of the former GDR shopping center “Centrum Warenhaus”, built in 1979. The competition task was to present a concept for Turn this massive 80m x 80m square building block into usable office space for the digital age.