Build castles in the sky

One Bangkok is the largest project we have managed, says Mr. Hua Tiong.

Lim Hua Tiong, general manager of development, said the company’s future development plans include mixed-use projects that could be located outside Bangkok with a horizontal development concept.

“With our experience on One Bangkok, the largest single-site property investment in Thailand, the development of mixed-use projects is an ideal continuation,” he said.

Founded in November 2015 with a registered capital of 13.5 billion baht, Frasers Property Holdings managed the development of two mixed-use projects owned by the Sirivadhanabhakdi family on land leased from the Crown Property Bureau.

TCC Assets, one of the real estate arms of the family that developed The Parq, invested 8 billion baht in this phase, which ended in 2020.

The other project is One Bangkok, where the first phase with a gross floor area (GFA) of 1.3 million m² above ground is expected to be completed by the end of 2023.

“Before starting other projects, we will continue phase two at The Parq and One Bangkok, with a combined GFA of 600,000 sq m after the completion of phase one. These are two important efforts,” said Mr Hua. Tiong.

One Bangkok is developed by One Bangkok, a joint venture between TCC Assets and Frasers Property Limited (FPL), a Singapore-listed investment holding company owned by the family through TCC Assets and Thai Beverage Plc.

“We were appointed to manage the development of this project because it is a very complicated mixed-use development. It is also the largest project we have managed,” he said. 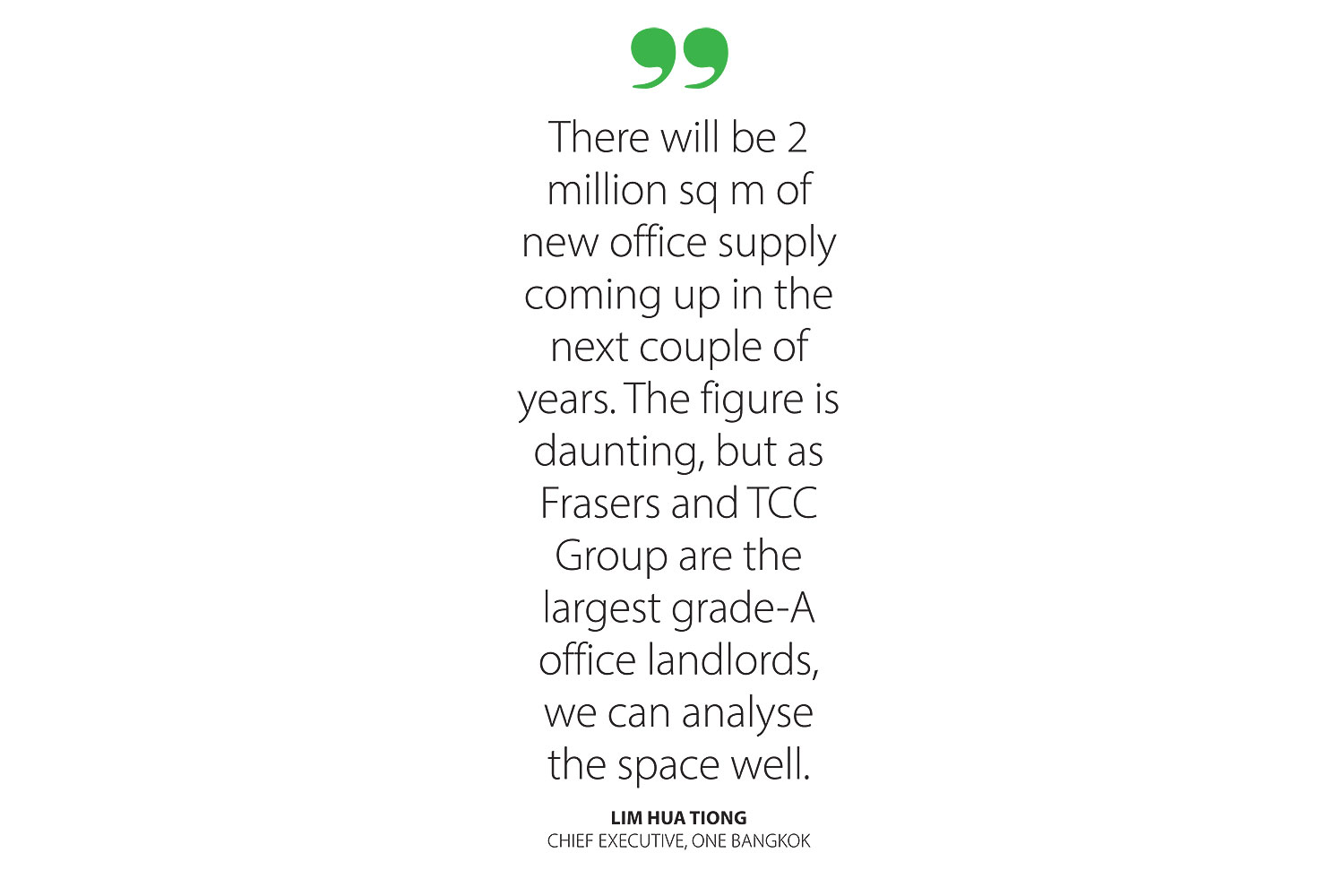 With a registered capital of 5.5 billion baht, One Bangkok was established in April 2017 and began construction of the project the same year.

“We have just completed the most difficult part – the substructure works with a total space of 500,000 sqm underground,” said Mr. Hua Tiong, also general manager of One Bangkok.

“Like everyone else, we were affected by Covid-19, but we built the foundations during this period. Even during the confinement, trucks could enter and exit the site for excavation work, which was mainly carried out by machines. We were lucky enough that we were able to work and finish during the pandemic.”

One Bangkok is expected to have a total GFA of 1.33 million m², excluding basement.

The largest area, accounting for 50% of the total, is Class A office space spread across five towers.

About 25% of the space is for five luxury and lifestyle hotels and residences, with the rest reserved for commercial areas in four zones and a convention hall called The Forum with a maximum capacity of 10,000 people. .

“In our case, it’s unique because most mixed-use projects don’t have a convention hall.”

Phase two is expected to have a commercial GFA of 430,000 sqm, including hotels, residences and offices, Hua Tiong said.

The office space has a leasable area of ​​200,000 m² and is planned for two buildings. One of them will be the tallest in the country, called The Signature Tower, with a height of 430m, he said.

“There are three challenges for mixed-use development: construction, operation and business,” Hua Tiong said. “We are not worried about our half million sq m of office space as we have conducted a thorough study of the office market in Bangkok.”

He said more than 70% of Bangkok’s office supply, or some 8-10 million square meters, were old buildings where tenants are looking for newer and better space to move into.

Large companies with multiple offices also want to consolidate after the pandemic has been brought under control, said Hua Tiong, who is also managing director of Frasers Property Vietnam.

“There will be 2 million sq m of new office supply coming in the next two years. The figure is daunting, but as Frasers and TCC Group are the largest owners of Class A offices, we can analyze the space well. “, did he declare. said.

A quarter of the supply will be built for the owners’ own use, Hua Tiong said, such as government offices or financial institutions that are not for rent.

Another 25% will be outside the central business district (CBD) area, he said. From the company’s experience, it is very difficult for large companies to get out of the CBD because the traffic in Bangkok is quite difficult.

Hua Tiong said 25 percent of future supply is still in the planning stage, which could be difficult due to soaring construction costs.

“The remaining 25% of the planned supply, most of which comes from us, is still manageable,” he said.

Another reason One Bangkok offices will attract demand is that the towers are built to meet LEED and WELL Platinum standards, which are green building certificates, Mr. Hua Tiong said.

Many large companies, especially multinationals, have made commitments to sustainable development.

“We will be the first in Thailand to have ‘LEED for Neighborhood Development Certification’ as well as a platinum rating,” he said.

Reading from Communities in Action: Building a Better Georgia

Xi Jinping’s third term: After a decade of building the Belt and Road, where does China stand?