Editor’s Note: Eric Yep is S&P Global Platts ASEAN Content Editor and Ivy Lin is a Journalist for S&P Global Platts Energy Transition. The opinions expressed in the article are the personal opinions of the authors and do not represent those of CGTN.

While not the first sporting event or the Olympics to reduce its carbon footprint, it sets the blueprint for conceptualizing future global events: focusing first on reducing emissions instead of relying on compensation, which industry experts admit as a last resort. The higher the offsets required, the less effort is made to avoid or reduce actual emissions. Such events help us understand where CO2 emissions are coming from for global events so that reduction efforts can focus on the right areas. For example, the World Economic Forum in Davos and the COP26 conference saw a large share of emissions from travel, including private jets and international flights.

Total Winter Olympics baseline emissions were initially estimated in 2018 at 1.637 million metric tonnes of CO2 equivalent (mtCO2e). This estimate has now fallen to 1.306 million mtCO2e with more environmentally friendly infrastructure built for gaming. Organizers had prepared 1.7 million carbon credits, while the actual offsets needed are estimated at around 1.028 million mtCO2e, according to its sustainability report.

Actual shows are lower than forecast as COVID-19 restrictions have limited attendance. For context, a business class flight from London to Hong Kong is equivalent to 10 tons of CO2e, according to an estimate by author Mike Berners-Lee in his book “How Bad are Bananas? The Carbon Footprint of Everything.” If the carbon credits prepared for the Games are not used elsewhere, the Beijing Games will have excess offsets. At current market prices, 1.7 million carbon credits would cost about $26 million, based on the S&P Global Platts Nature-Based Carbon Credits price of $15.30 per mtCO2e on February 10.

The Beijing 2022 Olympics will be the first Olympics to have all venues powered by renewable energy, with solar and wind power as the main energy sources, the International Olympic Committee (IOC) has said.

Zhangjiakou is an emerging renewable energy hub in northern China, which released its energy development plan in 2015, the same year Beijing won its bid to host the Winter Olympics. It has a potential of 40 GW of wind and 30 GW of solar capacity and plans to install 50 GW of renewable energy by 2030 to power the entire Beijing-Tianjin-Hebei region.

By 2030, the Zhangjiakou Renewable Energy Zone is expected to replace fossil fuels with 33 million tons of standard coal equivalent and reduce CO2 emissions by 85 million tons, according to the development plan. In addition, Zhangjiakou plans 80% renewable energy in its generation mix and aims for all public transport and residential energy to use renewable energy, and net zero emissions in all industrial sectors by 2030, according to his plan.

China has also set a national target to increase solar and wind installation capacity to 1,200 GW by 2030, an increase of 189% from 2021 capacity. Chinese utilities like Huadian Group, Huaneng Group, Datang Group and Guohua Power has developed green energy projects in Zhangjiakou. 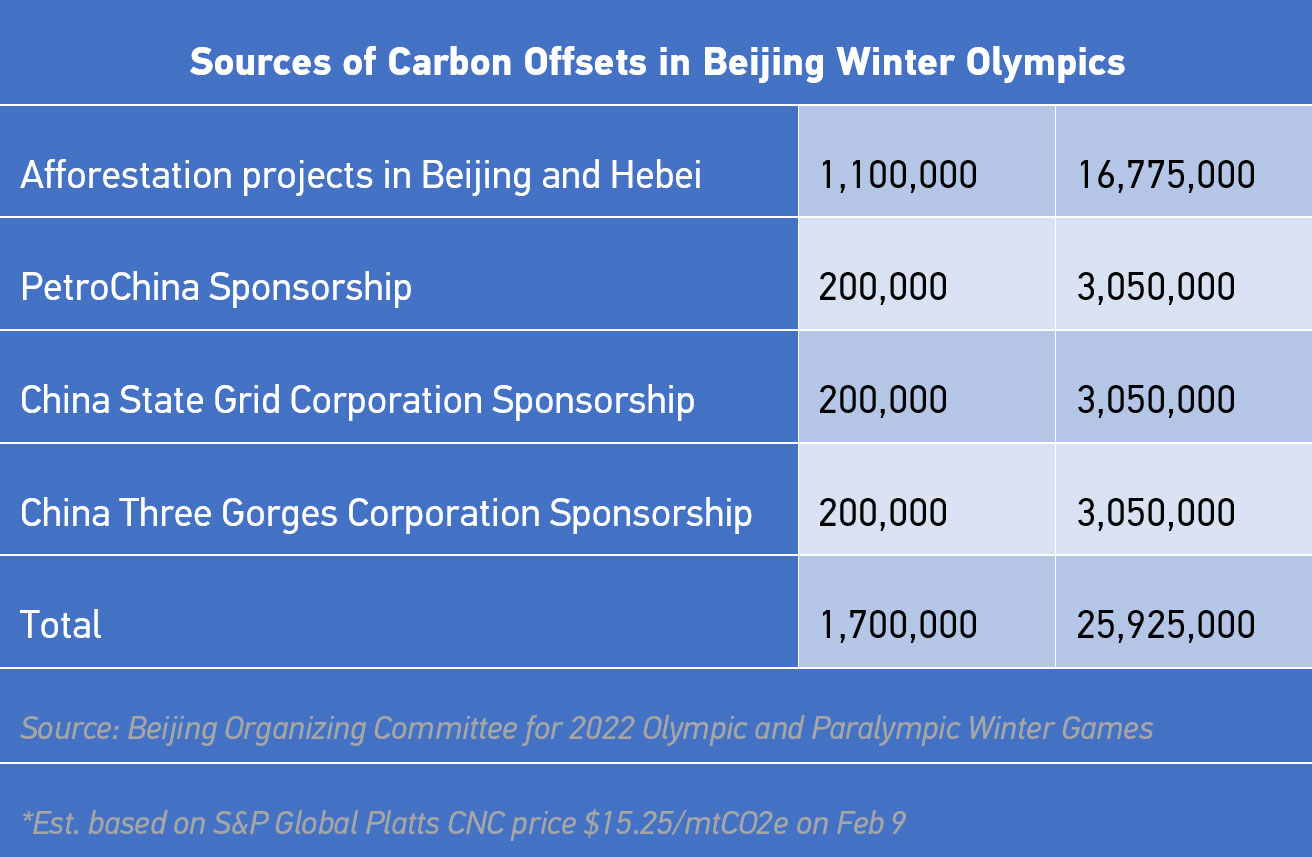 How green energy is transmitted and exchanged

To transmit electricity from Zhangjiakou to Beijing, a flexible DC power grid has been developed for 14.1 billion kilowatt-hours (kWh) of annual transmission, equivalent to 10% of the city’s electricity consumption, according to organizers.

A pumped-storage hydropower plant developed by State Grid of China in Fengning, Hebei province, will help manage intermittency when wind and solar power are unavailable. Compared to technologies such as large-scale batteries, using hydropower for energy storage is less complex and more cost-effective. The Fengning pumped-storage hydropower plant has a planned total installed capacity of 3.6 GW, and two generating units started operating on Dec. 30, 2021, with a capacity of 600 megawatts, according to data from the National Administration. Energy.

The Beijing Power Exchange Center, partly owned by State Grid, organized the green power trade to support the Beijing Games, according to China’s top economic planner, the National Development and Reform Commission. In 2021, 14 operators of Olympic venues and facilities in Beijing and Zhangjiakou participated in market-based green power trading with 14 generation utilities, such as Huadian Group and Huaneng Group, the NDRC said in a recent report. communicated. Green energy trade for Olympic venues in January-April 2022 totaled 141 million kWh. Even after the Games, electricity trade will support the expansion of renewable energy in China. 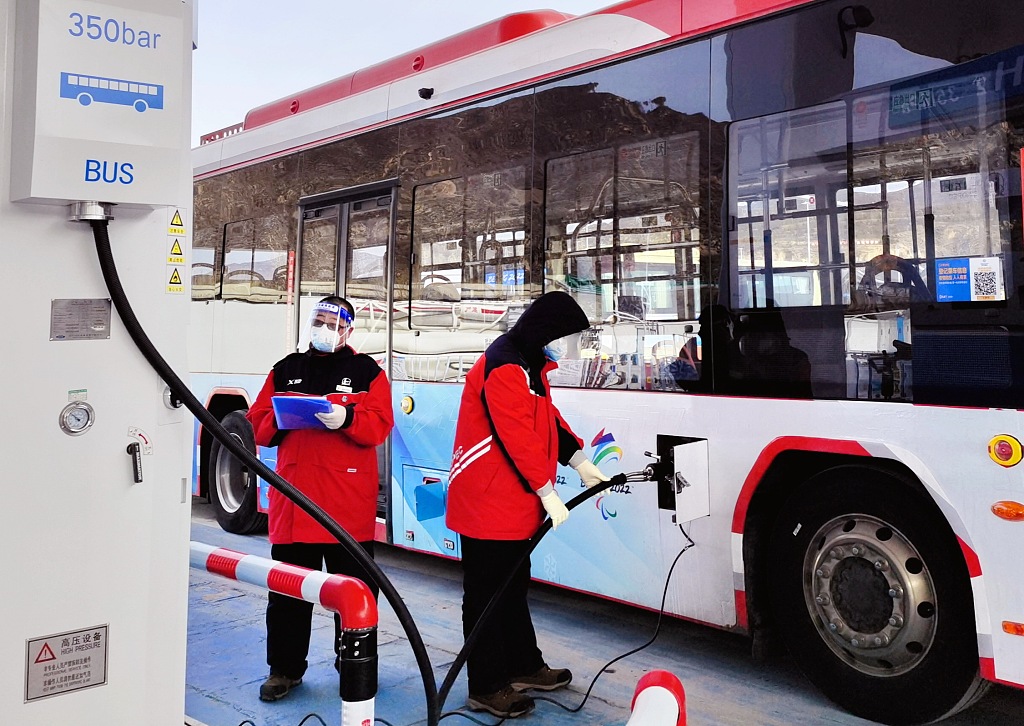 Hydrogen in the spotlight

The Olympic torch is powered primarily by hydrogen supplied by oil major Sinopec. There are 816 hydrogen vehicles deployed at the Games. China is using its first 400 kW mobile hydrogen generator, which serves as a portable charger that can operate in temperatures as low as minus 40 degrees Celsius. National oil companies Sinopec and PetroChina have each established four hydrogen refueling stations near Olympic venues.

PetroChina said its hydrogen refueling stations can supply 5,500 kg/d of hydrogen in total, which can support nearly 1,000 hydrogen vehicles. Its annual hydrogen production capacity has exceeded 2.6 million tons per year, including hydrogen produced from fossil fuels, industrial by-products and renewable energy. Sinopec’s gas stations mainly service hydrogen vehicles in Yanqing, Beijing and Zhangjiakou and are capable of supplying 2,500 kg/d of hydrogen to 212 vehicles in Yanqing and 1,000 kg/d to vehicles in Zhangjiakou. Sinopec’s hydrogen production capacity from its refining processes was 3.9 million tonnes per year, accounting for 11% of China’s hydrogen output, Platts reported earlier.

A Beijing 2022 Games spokesperson said the International Olympic Committee is mandating the sporting event to be “climate positive” from 2030.

“This means the IOC will require organizers to reduce direct and indirect emissions from the Games, offset more than the remaining emissions and create sustainable carbon-free solutions for the Games and beyond,” the spokesperson said.

But even before the 2030 target, the spokesperson said Paris was already preparing to stage the first climate-positive Olympics in 2024. Paris is also aiming to reduce carbon emissions by 50% compared to the Olympics. precedents, in part because 95% of its sites will be pre-existing or temporary. The 2028 Los Angeles Olympics will go one step further, without building a single new venue for the Games.